The 10th Gen iPad Features A 10.9-Inch Liquid Retina Display, And The A14 Bionic Chip 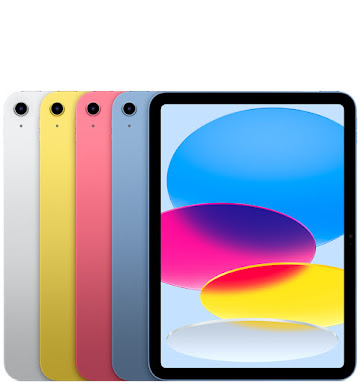 Apple announced a new iPad with an all-screen design, a big 10.9-inch Liquid Retina display, and the A14 Bionic chip.

According to Greg Joswiak, Apple's senior vice president of Worldwide Marketing, the updated cameras include an Ultra Wide 12MP front camera located along the landscape edge of the iPad for an even better video calling experience, and an updated 12MP back camera to capture sharp, vivid photos and 4K video.

He goes on to say that a USB-C connector allows users to connect to a variety of devices, that Wi-Fi 6 provides even quicker connections, and that cellular models have ultrafast 5G connectivity so users can stay connected while on the road. Apple has also introduced a new Magic Keyboard Folio, which is a two-piece design created exclusively for the new iPad.

The new iPad has an all-screen design and comes in four colors: blue, pink, yellow, and silver. The 10.9-inch Liquid Retina display stretches to the corners, giving consumers even more screen space for apps, games, and having fun on the iPad – all while remaining almost the same size as the previous generation.

The new Liquid Retina display has a resolution of 23601640-pixels, over 4 million pixels, a brightness of 500 nits, and True Tone technology. Touch ID has been relocated to the iPad's top button.

According to Joswiak, the A14 Bionic processor improves the CPU by 20% and the graphics by 10% over the previous version. In A14 Bionic, advanced machine learning functions are enabled by a 16-core Neural Engine, which has double the amount of cores as A13, enhancing machine learning capabilities up to 80%.

The front-facing camera is now situated along the landscape edge of any iPad for the first time. Users will always be gazing directly at the camera, whether they are on a FaceTime chat or producing a video for social media.

Center Stage, which automatically pans and zooms to keep users in view as they move about, is supported by the landscape Ultra Wide front camera with a 12MP sensor and 122-degree field of view. The iPad's improved 12MP Wide rear camera captures high-resolution images and crisp 4K video at 240 frames per second.

Dual microphones are intended to function in tandem with cameras, recording audio from the camera in use while reducing distracting background noise. New landscape stereo speakers are also available.

The new iPad will be available at apple.com/store and in the Apple Store app in 28 countries and regions, including the US, with availability in stores beginning Wednesday, October 26.

Wi-Fi models of the new iPad are available with a starting price of US$449; Wi-Fi + Cellular models start at $599. The new iPad, in 64GB and 256GB configurations, comes in blue, pink, yellow, and silver.