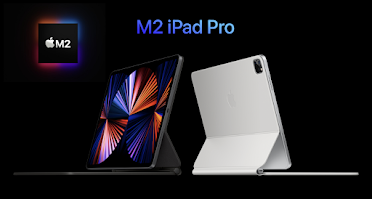 Apple has announced a new iPad Pro featuring the M2 processor, as well as a next-generation Apple Pencil hover experience.

The M2 processor has an 8-core CPU that Apple claims is up to 15% faster than the M1, as well as improvements in both performance and efficiency cores, and a 10-core GPU that delivers up to 35% quicker graphics performance. According to Greg Joswiak, Apple's senior vice president of Worldwide Marketing, when paired with the CPU and GPU, the 16-core Neural Engine can handle 15.8 trillion operations per second — 40% more than M1 — making the iPad Pro even more capable when tackling machine learning tasks. The M2 processor also has 100GB/s of unified memory bandwidth — 50% more than the M1 — and supports up to 16GB of rapid unified memory.

According to Joswiak, the M2's strength extends to the new media engine and image signal processor, which, when paired with the improved cameras, allow users to shoot ProRes video for the first time and convert ProRes material up to three times quicker.

Furthermore, hovering with an Apple Pencil (2nd generation) gives an entirely new dimension for users to engage with their screen, driven by the new iPad Pro and iPadOS 16 (coming next week). The Apple Pencil can now be recognized up to 12 mm above the display, giving users a preview of their mark before making it.

According to Joswiak, this also allows users to draw and depict with more precision. Text fields, for example, expand instantly when the pencil is near the screen in Scribble, and handwriting turns to text even quicker. This new functionality may also be used by third-party apps to create totally new marking and drawing experiences.

The new iPad Pro is available at apple.com/store and in the Apple Store app in 28 countries and regions, including the US, with availability in stores beginning Wednesday, October 26.