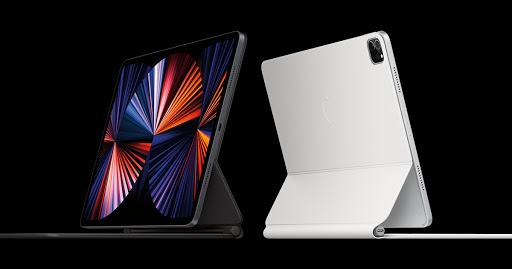 Apple has announced its most powerful iPad Pro ever. The new iPad Pro comes in two sizes: 11 inches and 12.9 inches. The latter features a new Liquid Retina XDR display that brings “extreme dynamic range” to the tablet.

“The revolutionary M1 chip has been a breakthrough for the Mac, and we’re incredibly excited to bring it to iPad Pro,” said Greg Joswiak, Apple’s senior vice president of Worldwide Marketing, said in a press release. “With M1’s huge jump in performance, a groundbreaking extreme dynamic range experience on the 12.9-inch Liquid Retina XDR display, up to 2TB of high-speed storage, Thunderbolt expansion, a four-speaker audio system, pro cameras with LiDAR Scanner, blazing-fast 5G connectivity, an amazing video-calling experience with Center Stage — combined with the advanced features of iPadOS and a powerful pro app ecosystem all in a device users can hold in one hand — there’s nothing else like iPad Pro.”

The 8-core CPU design of the M1 chip features the world’s fastest CPU cores in low-power silicon — delivering up to 50% faster CPU performance than A12Z Bionic. Joswiak says the 8-core GPU delivers up to 40% faster GPU performance. And because the M1 shares the same fundamental architecture of the A-series chips, iPadOS is already optimized to take full advantage of the technologies in the M1.

The new Liquid Retina XDR display brings the front-of-screen performance of the Pro Display XDR to the 12.9-inch iPad Pro. Engineered with a mini-LED design that uses over 10,000 LEDs across the entire back of the display, the Liquid Retina XDR display features up to 1000 nits of full-screen brightness, 1600 nits of peak brightness, and 1 million-to-1 contrast ratio, according to Apple.

The display includes other advanced technologies that can also be found in the 11-inch iPad Pro, including ProMotion, True Tone, and P3 wide color support, and support for HDR and Dolby Vision content.

The new iPad Pros come with a 5G option. U.S. models of the tablets support millimeter wave, the higher frequency version of 5G, allowing the iPad Pro to reach speeds up to 4Gbps. iPad Pro also features support for eSIM, which should make it easy to find a network and sign up for a 5G data plan quickly.

The new iPad Pros add support for Thunderbolt and USB 4  with 4x more bandwidth for wired connections than the previous iPad Pro — up to 40Gbps. Thunderbolt supports 10Gbps Ethernet and opens up an ecosystem of high-performance accessories, like faster external storage and even higher resolution external displays, including the Pro Display XDR at full 6K resolution.

The TrueDepth camera system on iPad Pro features a new 12MP Ultra Wide front camera designed specifically for iPad, enabling “Center Stage,” which Apple says is a new experience for video calls. Center Stage uses the much larger field of view on the new front camera and the machine learning capabilities of M1 to recognize and keep users centered in the frame.

As users move around, Center Stage automatically pans to keep them in the shot. When others join in, the camera detects them too, and zooms out to fit everyone into the view and make sure they are part of the conversation.

Other things you should know about the new iPad Pros, per Apple:

° The ISP and Neural Engine in M1 unlock even more capability from the pro camera system, bringing support for Smart HDR 3 for the first time to iPad Pro. And in low-light conditions, the ISP and LiDAR Scanner quickly and accurately focus images and videos to capture incredible details from almost no light at all.

° iPadOS 14.5, which will be available to iPad customers starting next week, comes with new additions, including expanded language support for Apple Pencil features like Scribble and Smart Selection, new emoji, support for the latest gaming controllers, and the ability to share lyrics and see top songs in cities around the world with Apple Music.

The new iPad Pro is available to order beginning Friday, April 30, on apple.com and in the Apple Store app in 31 countries and regions, including the U.S. It will be available in Apple Store locations in the second half of May.