Valve's Steam Deck Is A Handheld PC. Starts at $399, Releases In December 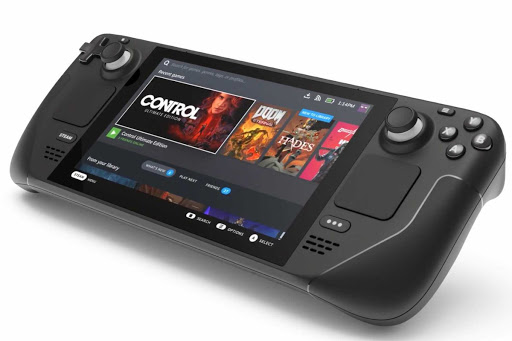 Valve has revealed the Steam Deck, which will arrive in December in the US, Canada, the European Union and the UK. The system starts at $399.

It has a 7-inch touchscreen, with a resolution of 1,280 x 800 at a 16:10 aspect ratio, 400 nits of brightness and a 60Hz refresh rate. It features dual thumbsticks, two 32.5mm square trackpads, an analog directional pad, four main face buttons, triggers and a quartet of grip buttons, as well as gyro controls. The Steam Deck also has a headphone jack, stereo speakers, dual microphones and haptic feedback. It weighs around 669 grams and it's just under a foot wide.

Valve has partnered with AMD on the hardware. The custom chipset features a 2.4-3.5GHz processor and a 1.0 to 1.6GHz GPU with 8 RDNA 2 compute units. The handheld PC comes with 16GB of LPDDR5 RAM and up to 512GB of NVMe internal storage, which you can expand with a microSD card. Valve says the 40-watt-hour battery will power the device for between 2 and 8 hours on a single charge. The battery life will depend on how resource intensive the games you play are. 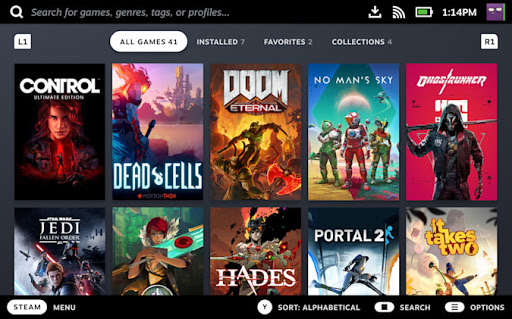 Steam Deck runs on a new version of SteamOS that's designed for handheld use. You'll have access to your full library of games. You can expect to have access to many Steam
features, including chat, remote play, cloud saves and the Steam storefront. The device has a built-in quick suspend and resume feature. Pressing the power button will suspend your game and send the Steam Deck into sleep mode. You'll be able to continue where you left off when you hit the power button again.

Steam Deck will support a variety of Bluetooth and USB-C peripherals. You can plug in a powered USB-C hub and use multiple devices at once. You can connect the system to an external display and play games at up to 8K at 60Hz or 4K at 120Hz. Valve is also making an official dock with DisplayPort 1.4, HDMI 2.0 and Ethernet ports, as well as one USB 3.1 connection and two USB 2.0 sockets. You'll be able to use the Steam Deck as an actual PC.

The base $399 Steam Deck comes with 64GB of eMMC internal storage and a carrying case. For $529, you can upgrade the storage to a 256GB NVMe SSD. The 512GB model costs $649 and comes with "premium anti-glare etched glass." The dock will be sold separately at a later time.

Learn more at https://t.co/ZOTx3KUCVK and reserve yours tomorrow. #SteamDeck pic.twitter.com/jcgbaKfT9c