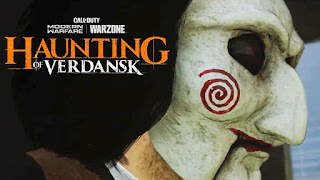 “As Halloween draws near, a squad of operators drops in for what seems to be a normal infiltration into Verdansk, though there’s been back-channel chatter about some unexplained and odd occurrences across the remote areas of the map," reads the latest blog post about the seasonal event. "Operators have been briefed about reports concerning a serial killer who wears his victim’s faces on his own. There’s scattered intel about strange sounds emanating from various locations within the warzone; and not least the piercing, creepy laugher of a ventriloquist doll.

“It isn’t long before hell breaks loose: One by one, the squad is brutally picked off until there is just one survivor, who after a confrontation with Verdansk’s own urban legend, vows to return under the cover of night and avenge his brothers in arms.”

Special supply boxes contain spooky new gear and ways to customize, all in the name of adding that personal touch when taking to the event's new modes. A new Zombies mode has also invaded Warzone.