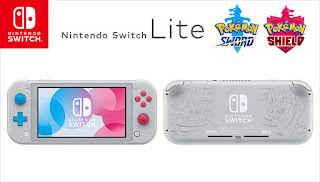 A special Pokémon-themed version of the newly announced Nintendo Switch Lite system will be available in North America starting Novermber 8. The Nintendo Switch Lite Zacian and Zamazenta Edition features stylish cyan and magenta buttons and illustrations of the two new Legendary Pokémon from the upcoming Pokémon Sword and Pokémon Shieldgames* for Nintendo Switch. This unique system will be available at a suggested retail price of $199.99, while supplies last.
“November is shaping up to be a big month for Pokémon fans, with the arrival of this special hardware followed by the launch of the Pokémon Sword and Pokémon Shield games one week later,” said Nintendo of America President Doug Bowser. “The Nintendo Switch Lite Zacian and Zamazenta Edition will be a great gift for Pokémon fans who want to play the latest games on the go.”