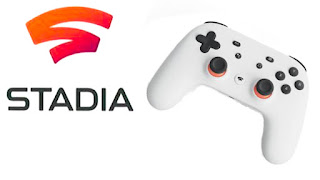 Google has unveiled its new gaming initiative, Stadia. Stadia is not a piece of hardware, it's a streaming platform meant to bridge across devices and provide players instant access to their games, while also further integrating YouTube capture, streaming, and sharing. Google is aiming to stream games at launch in 4K at 60 fps for both playing games and sharing game streams, with goals of eventually supporting 8K and 120+ fps. Google Stadia features a custom 2.7 GHz hyperthreaded x86 CPU with AVX 2 SIMD. It also boasts a custom AMD GPU that’s capable of 10.7 teraflops of power using HBM2 memory and 56 compute units. For memory, it has 16GB of RAM with up to 484GB/s transfer speeds and 9.5MB of L2+L3 cache. On top of all of this, it includes SSD cloud storage.
Stadia will also allow players to bring an experience via Stadia from one platform to the next, from a phone to a tablet to a Chromecast on TV without any need to wait for download times. Existing controllers will work with games on Stadia, but the Google Stadia Controller was also introduced. The controller connects through Wi-fi directly to the game running in the Google data center. The controller also has a capture button, which will save game clips to YouTube, either privately or to the world. There is also the Google Assistant button. Players can use the built-in microphone with this button to access features created by developers to use in games. The controller also features a cool little easter egg as the Konami Code is on the bottom of the controller.
Google is planning a 2019 launch for Stadia. Additionally, we don't have price details for what the streaming platform or the specific Stadia controller will cost.


UPDATE 10/25/19 - Google that Google Stadia will arrive on November 19. With servers launching at 12 PM ET/9 AM. PT, fans will either have to preorder the Founder's Edition or subscribe to the Stadia Pro plan. At $9.99 a month, The Pro subscription gives players access to 4K resolution, better sound, and access to a growing library of free titles, starting with Destiny 2: The Collection.