Razer Announces Their Own Phone 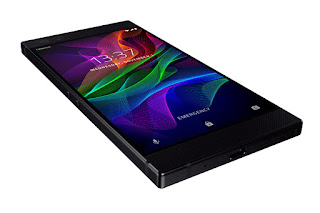 Razer is known for its gaming peripherals and PCs, but the question now is will it be known for its phone. With its new $699 Razer Phone, the company tried to balance pure power with a handful of hardware features. In doing so, Razer has built a gaming phone that you don't have to be a gamer to appreciate when it launches on November 17.

The Razer Phone uses a 5.7-inch IGZO LCD panel, which is plenty bright and pleasant to look at. The screen refreshes at a rate of 120Hz — which is the same as an iPad Pro. Long story short, that makes everything that happens on-screen look really smooth and great for games too. The phone also features Snapdragon 835 comes in. The 8 CPU cores are paired with an Adreno 540 GPU, but Razer has added 8GB of RAM to compliment the screens refresh rate. Unfortunately there’s no headphone jack, though the included USB-C-to-headphone adapter does pack a 24-bit, THX-certified digital-to-analog converter (DAC). Ad for the battery, there's a huge 4,000mAh battery inside, and sitting above and below the screen are a pair of front-facing speakers.
The phone runs a mostly clean version of Android Nougat with the Nova Prime launcher pre-loaded, giving people extensive customization options right out of the gate. Razer is also working with game developers on themes users can apply to their phones, because of course they are.


It should be noted that the phone isn't IP rated for water or dust resistance, so you can't be as care less with it as you could be with other flagship devices. The phone has a 12-megapixel dual camera, but not much is known about the quality of the photos. What are your thoughts on the Razer Phone ?
Posted by 9To5TechNews at 8:26 PM