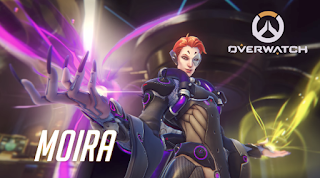 During the Blizzcon 2017 opening ceremony, Overwatch director Jeff Kaplan revealed Moira, the newest hero coming to game. Moira is a support hero, but she appears as though she can take care of herself, as the trailer shows her sprinting into battle. Similar to Hanzo's scatter arrow, Moira can hurl damaging orbs around corners to hit enemies. For more direct combat interactions, Moira has purple damage bursts, as well as yellow healing bursts. She also has the ability to teleport around the map. Her ultimate is a beam that deals heavy damage to enemies, while healing any teammates in the path of the attack. Moira will hit PTR before receiving a wide release on consoles and PC later.