Pokemon And Funko Announce “A Day with Pikachu” Line 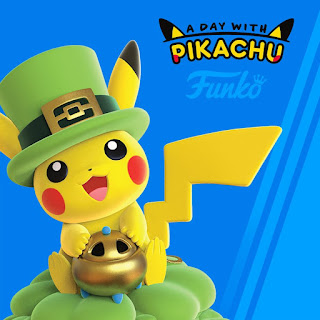 The Pokémon Company International and Funko, Inc. have announced a continuation of their partnership and licensing agreement to create “A Day with Pikachu,” a brand-new series of 12 Pokémon figures by Funko. The new collection will be available on PokemonCenter.com, the premier destination for official Pokémon merchandise in the US.
Each figure from the “A Day with Pikachu” line will depict the iconic Pokémon Pikachu celebrating a different season or holiday, with one new figure arriving every month. The first figure will release February 13, 2019, and features Pikachu holding a Luck Incense. Each figure will also come with an insert showing a silhouette sneak peek of the Pikachu figures scheduled for release in the coming months.
“We’re excited to team up with Funko once again to deliver more beloved Pokémon characters to our fans,” said J.C. Smith, senior director of consumer marketing at The Pokémon Company International. “Funko’s distinct, stylized aesthetic makes them the perfect partner to introduce an expanded range of figures that will delight both the Pokémon and Funko communities.”
In addition, as part of their ongoing partnership, The Pokémon Company International and Funko, Inc., will deliver an expanded line of Funko Pop! figures, following a successful collaboration last year that brought the first-ever Funko Pop! Pokémon figure featuring Pikachu.
Releasing on Pokémon Day on February 27, 2019, the next Funko Pop! Pokémon figure showcases a 4-inch vinyl version of Bulbasaur, a favorite character from the popular video game franchise. Additional Funko Pop! Pokémon figures are expected to launch in the future.
“The Pokémon franchise is one of the world’s most loved brands. We are thrilled to share with customers this unique collaboration with ‘A Day with Pikachu,’” said Molly Hartney, chief marketing officer at Funko. “Funko and Pokémon fans will also be pleasantly surprised to see Bulbasaur launch as a Pop! figure on Pokémon Day. We look forward to bringing the fans of Pokémon and Funko together with this phenomenal product line.”
More information about the “A Day with Pikachu” line is available at PokemonCenter.com. Fans can also sign up at Funko.com to receive updates on this series as well as the upcoming Funko Pop! Pokémon figures.