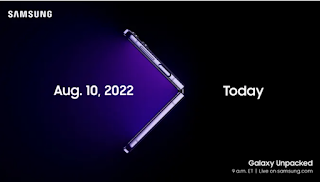 Samsung is preparing to introduce its next slate of devices soon. The companies  upcoming Unpacked event is planned for August 10th at 9 AM ET. The keynote will be webcast live on Samsung's website, with no in-person component.

The next generation of Samsung's Galaxy Z Fold and Z Flip foldable phones, as well as a pair of new smartwatches and wireless earbuds, are largely expected to be unveiled. We don't know much about the upcoming products yet, but rumors indicate that Samsung may sell the foldable smartphones at a lesser price than previously.