Diablo: Immortal Is Coming To Mobile And PC On June 2nd 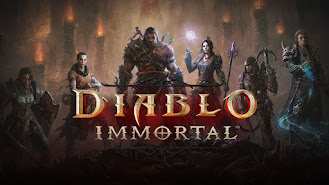 Blizzard revealed Diablo: Immortal at BlizzCon 2018, which will fill in the plot gaps between Diablo II and Diablo III. However, the fact that it was introduced as a mobile-only game did not sit well with fans. After nearly three and a half years, the game not only has a release date, but Blizzard has revealed that it will be accessible on PC after all.

Diablo: Immortal will be available in most regions of the world on PC, iOS, and Android on June 2nd. People in various Asia-Pacific areas may have to wait a few weeks longer. It's a free-to-play game with some in-game purchases.

The PC version will be in open beta at first, but will include all material and features. All progress and purchases will be carried over as well. It will support cross-platform play and save, so you should be able to switch between PC and mobile device with ease. The MMORPG lets players to take on tasks in groups of eight, and it offers a faction-based PVP system.

Blizzard said in a blog post that it was undecided about building a PC version, which it refers to as "an experiment." Ultimately, the production team opted to make a native PC build because a substantial portion of fans would almost certainly try to play it using an emulator anyhow.