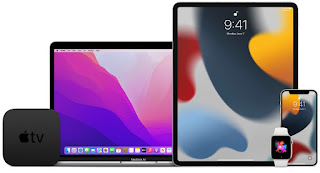 macOS Monterey 12.3.1 is a maintenance upgrade with fixes for external displays, Bluetooth-related issues, and support for the new Business Essentials program. According to Apple’s release notes, the upgrade fixes the following issues:

USB-C or Thunderbolt external display does not turn on when connected to Mac mini (2018) as a second display
– Bluetooth devices, such as game controllers, may disconnect from your Mac after playing audio through some Beats headphones

You can download macOS Monterey 12.3.1 by going to System Preferences —> Software Update. While there, if you have one of the new Apple Studio displays, you’ll also find Apple Studio Display Firmware Update 15.4.

According to Apple, iOS 15.4.1 and iPadOS 15.4.1 provide the following bug fixes for your iPhone:
Battery may drain more quickly than expected after updating to iOS 15.4
Braille devices may become unresponsive while navigating text or displaying an alert
Made for iPhone hearing devices may lose connection within some third-party apps

You can update your iPhone and iPad by going to Settings —> General —> Software Update.

Apple has also updated the HomePod firmware to version 15.4.1.According to Apple’s release notes, it addresses an issue where some HomeKit-enabled accessories could fail to respond when controlled via Siri. This update also includes bug fixes for your HomePod.

Your HomePod and HomePod mini should automatically update. If not:

tvOS 15.4.1 includes bug fixes and minor improvements. It can be downloaded over the air through the Settings app on the Apple TV by going to System —> Software Update. ‌‌‌‌If you have an Apple TV and have automatic software updates enabled, it should upgrade automatically.

watchOS 8.5.1 is a maintenance upgrade with security updates and bug fixes.

WatchOS 8.5.1 can be downloaded for free through the dedicated Apple Watch app on the iPhone by going to General —> Software Update. To install the new software, the Apple Watch needs to have at least 50% battery, it needs to be placed on a charger, and it needs to be in range of the ‌‌‌‌iPhone‌‌‌‌.