ICYMI Call of Duty: Warzone Is Coming To Mobile 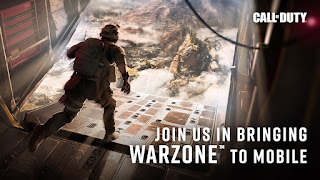 The free-to-play battle royale game Call of Duty: Warzone will soon get a mobile version. Following the release of Call of Duty: Mobile in 2019, the forthcoming Warzone will be the second CoD title converted for mobile. Season 2 of Warzone, which was published last month, is most likely still being enjoyed by fans. The new mobile game's release date has yet to be revealed, however games journalist Tom Henderson did remark that the title has already been posted to Playtest Cloud, a mobile game testing site.

Fans of mobile games may expect to see more from the Activision universe in the future. Diablo Immortal's mobile version is currently under development and is scheduled to be released later this year. Microsoft's proposed acquisition of Activision Blizzard, which is slated to be completed in fiscal year 2023, would give it ownership of Activision's massively profitable mobile gaming company.

We are building Call of Duty® Warzone™ for mobile! Apply today for exciting roles across the development and publishing teams!