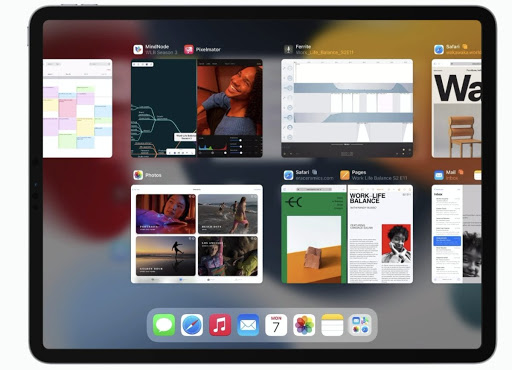 Apple says the new multitasking experience is even more intuitive. A new multitasking menu appears at the top of apps, letting users go into Split View or Slide Over with just a tap. Users now have quick access to the Home Screen when using Split View. Apple says this makes it easier to get to the right app. Using the new “shelf,” they can also multitask with apps that have multiple windows like Safari and Pages, as well as quickly preview emails.

Using an external keyboard, users can access new keyboard shortcuts and a redesign of the menu bar. Users can set up and switch between Split View and Slide Over with new shortcuts for multitasking right from the keyboard.

WIDGETS AND THE APP LIBRARY

Users can now place widgets among apps on Home Screen pages. This provides more information at a glance and offers a more personalized experience. A new, larger widget size is designed specifically for the larger display of iPad. iPadOS 15 also brings all-new widgets for App Store, Find My, Game Center, Mail, and Contacts.

Also coming to iPad is the App Library. It automatically organizes apps into categories like Productivity, Games, and Recently Added. Plus, the Apple Library allows users to access all their apps right from the Dock.

Apple says that FaceTime in iPadOS 15 makes conversations feel even more natural. Users can now share experiences with SharePlay while connecting with friends on FaceTime. This includes listening to songs together with Apple Music, watching a TV show or movie in sync, or sharing their screen to view apps together.

Shared playback controls let anyone play, pause, or jump ahead. Users can extend playback to Apple TV. They can watch it on their TV while sharing the moment with others connected over FaceTime. SharePlay also lets users share their screen.

Swift Playgrounds 4 allows users have the tools to build iPhone and iPad apps right on their iPad and submit them directly to the App Store. Code is immediately reflected in the live preview while building apps, and users can run their apps full screen to test them out.

A new open project format based on Swift packages can open and be edited in Swift Playgrounds for iPad as well as within Xcode on Mac.

According to Apple, other iPadOS features include:

The developer preview of iPadOS 15 is available to Apple Developer Program members at developer.apple.com starting today, and a public beta will be available to iPadOS users next month at beta.apple.com.

New software features will be available this fall as a free software update for iPad mini 4 and later, iPad Air 2 and later, iPad 5th generation and later, and all iPad Pro models. For more information, visit apple.com/ipados/ipados-preview.