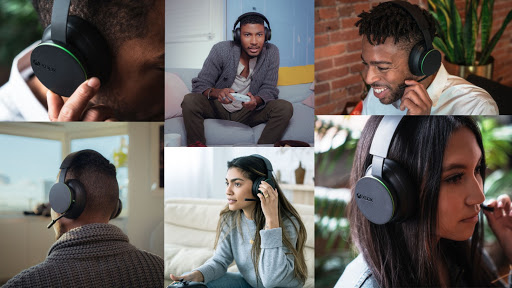 Xbox has announced a new headset to complement the Xbox Series X and Xbox Series S. The Xbox Wireless Headset allows you to hear games loud and clear with low latency and lossless audio. This new device supports the most popular spatial sound technologies, including Dolby Atmos, DTS Headphone: X, and Windows Sonic. Xbox specifically mentions being able to better hear crucial sounds like enemy footsteps as they attempt to sneak up on you.

On top of being able to hear your games better, the headset enables players to better hear those you're playing with. Intelligent chat audio quality is possible thanks to dual beamforming microphone elements that pick out speech, as well as voice isolation tuning that helps your microphone pick up your voice over any background noise. There’s also a new, toggleable auto-mute feature automatically turns off your mic when you're not talking so you're not heard unless you're meant to be.

Using the Xbox Accessories app on Xbox Series X/S, Xbox One, or PC, you can fine-tune and customize your experience, including equalizer settings, bass boost, auto-mute sensitivity, mic monitoring, and even the brightness of the microphone's mute light. You can also connect to this app to download updates to the headset.

The headset can connect to Xbox Series X/S, Xbox One, and Windows 10 PC, plus mobile devices via Bluetooth. That means you can use the headset to listen to music on your phone before switching over to your Xbox for gaming without any wires. When it comes to battery life, you can squeeze four hours of use out of 30 minutes of charging, of 15 hours of use out of three hours of downtime charging. The new Xbox Wireless Headset is available beginning March 16. The headset is priced at $99.99.