Marvel’s Avengers Will Be Assembling In May 2020 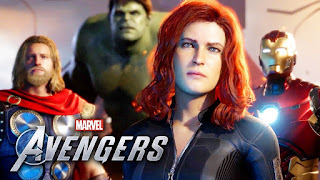 During Square Enix’s E3 presentation, we got our first real glimpse at what Square Enix and Crystal Dynamics have been working on with Marvel’s Avengers.
Marvel Avengers is an online action/adventure game with a focus on cinematic storytelling, built to be played by up to four players online at the same time. While the main characters at launch (Captain America, Hulk, Thor, Black Widow, and Iron Man) should be familiar to anyone who has gone to the movies over the last decade, that this is Crystal Dynamics take on the characters and their world.
The story on Avengers Day, as the team is celebrating the opening of the west coast headquarters in San Francisco from onboard their custom helicarrier, (this is likely to play a bigger part of the story). In what appears to be a disastrous heist gone wrong, the helicarrier goes down, large destroying the city, and Captain America is thought to be dead (I don’t think he’s really dead). The story cuts to 5 years later after the now-infamous "A-Day" and disbanding of the Avengers, when the team must reassemble to face a new threat. The game also has an all stay cast of voice actors, see might even say the Avengers of voice acting.
We did get one extra character tease near the end of the presentation, with the appearance of Hank Pym (Antman). Crystal Dynamics was also quick to point out that Avengers is planned as a game that will grow over time with new regions and characters, all of which will come free to those who have the game. In addition, the team promised no loot boxes or pay-to-win purchases connected to the project. Also PS4 are getting exclusive content including beta access. Avengers is set to release on May 15, 2020 for PS4, Xbox One, PC, and Stadia.