Get A Free Shiny Pikachu Or Shiny Eevee for Pokemon: Let’s Go, Pikachu/Eevee With Pokemon Pass 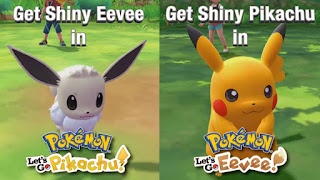 From May 11 through June 23, 2019, fans can receive a Shiny Pikachu or Shiny Eevee for their Pokémon: Let’s Go, Pikachu! or Pokémon: Let’s Go, Eevee! video game at participating Target stores in the US.
To receive one of these Pokémon, players can download the new Pokémon Pass app for select iOS and Android devices. The app delivers exclusive digital rewards to Pokémon Trainer Club account owners when they’re at designated retail locations. When players who have downloaded the app enter a participating Target store, Pokémon Pass will use geolocation to automatically notify them of nearby reward offerings. The app will then guide them through several prompts, including one to scan a special QR Code found in-store, so they can claim their Shiny Pikachu or Shiny Eevee.
Shiny Pikachu will be distributed as follows:

Shiny Eevee will be distributed as follows:

Furthermore, players who visit Target on May 11 between 10 a.m. and 1 p.m. local time will be treated to free giveaways celebrating the release of the POKÉMON Detective Pikachu movie, including a Psyduck promo card for the Pokémon Trading Card Game and a movie poster (while supplies last; quantities are limited).
In the future, Pokémon Pass will continue to offer more digital rewards at participating retail stores, such as Pokémon distributions for video games, digital stickers and wallpapers, and more.
Pokémon Pass is now available to download in the US from the App Store and Google Play at no cost.