Baptiste Is The 30th Hero Announced For Overwatch 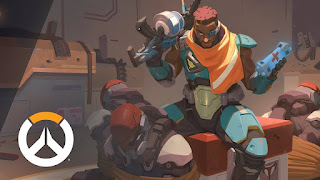 Blizzard has announced the 30th hero for Overwatch, a battle medic by the name of Baptiste. Baptiste wields a healing SMG, called the Medic SMG, which has a three-round burst with hitscan. The hitscan means that the bullets just have to be aimed at someone to heal them, there's no travel time from the gun to the target, theoretically making Baptiste the fastest healer with that method.
The alt fire for the gun blasts a healing grenade that heals teammates in an area-of-effect range. The grenade and the SMG have separate ammo counts, so you can switch around as the situation calls for.
Baptiste's skill involves creating a regenerative field around him to heal himself and allies, similar to Lucio's music, but differs in that allies do not have to stay near Baptiste to retain the active regeneration. He also has Exo boots, which allow him to crouch into a superjump. Amplification Matrix, Baptiste's ultimate, creates a matrix field that doubles the damage and healing effects of any friendly projectiles that pass through it, this could be key to turn the tide of victory. Baptiste is available to play now in the PTR on PC.