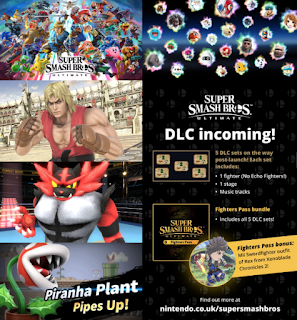 In the final Super Smash Bros. Ultimate Nintendo Direct video presentation before the game launches exclusively for the Nintendo Switch system on Dec. 7, Nintendo blew the lid off of many new modes, fighters and gameplay features of the massive video game crossover event, including details about upcoming DLC. With the reveal of new fighters Ken from the Street Fighter series and Incineroar from the Pokémon franchise, all playable fighters at launch – all 74 of them! – have been unveiled. But more fighters, stages and music tracks will be coming in the form of DLC, which was also announced in the video presentation. To view the Nintendo Direct video in its entirety, visit https://www.nintendo.com/nintendo-direct.
Nintendo also announced an incentive for fans to pre-purchase the digital version of the game (and avoid long lines and the holiday rush!). My Nintendo members who pre-purchase the Super Smash Bros. Ultimate game in Nintendo eShop or on Nintendo.com will earn a bonus of 300, or double, Gold Points. This limited-time offer runs now through 11:59 p.m. ET on Dec. 6. The bonus points will be issued on the game’s launch day.
“There are still elements of today’s presentation that hold a lot of secrets for players to discover, but with the launch of Super Smash Bros. Ultimate only a little more than a month away, this Nintendo Direct presentation is a final look at one of the most massive games Nintendo has ever produced,” said Doug Bowser, Nintendo of America’s Senior Vice President of Sales and Marketing. “With so much to experience and discover in this game – and with a huge library of other games to choose from – we believe fans are going to be playing a lot of Nintendo Switch this holiday season.”
Some of the highlights revealed in the video include: