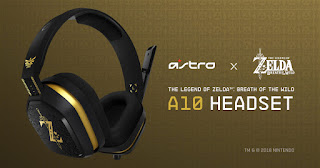 Astro and Nintendo are collaborating to make a Zelda-themed headset that’s inspired by Breath of the Wild. The headset is an A10 headset with sleek Zelda iconography covering it. The idea, Astro says, is to release headsets that can be used for Nintendo Switch voice chat.
“We worked closely with Nintendo to create a stylish, uncompromising audio experience, with a special new chat adapter designed specifically for the Nintendo Switch," says Astro licensing chief Cris Lee. "With the Nintendo Switch Online smartphone app, players can chat with their friends while playing compatible games at home or on the go."

The headset gets released this winter, but will be shown off at E3.