Symmetra Might Change From Support To Defense Class In Overwatch Update 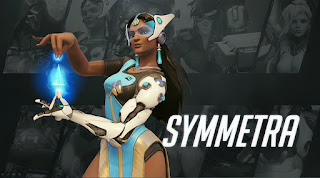 It looks like Symmetra is the next Overwatch character up for some big changes. In a forum reply, lead designer Geoff Goodman laid out some of the changes coming to the support character, most notably that she wouldn't be playing support anymore and would, instead, likely become a defense class character.
Here's what Goodman said:
We currently have moved her to Defense. We tried a healer version which had her turrets healing instead of dealing damage, but it felt super awkward, especially with how fast Overwatch moves.
That said, we are playing with a new way her turrets deploy. Instead of having to stick them directly onto a wall herself, she can now fire an un-deployed version like a projectile, which sticks to walls/ceilings/etc. Once it sticks, it will unfold like it does on the wall currently when she builds them.
This helps for a bunch of reasons but one of the big ones is that it makes it a lot easier to play her on offense or just be able to preposition her turrets much more easily/quickly.
Be sure to note the use of the word "currently" here, which carries the implication that none of this is set in stone. However, here are a scattershot for possible changes that Goodman has mentioned for you Symmetra lovers to mull over: