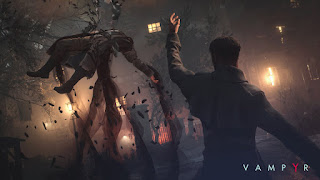 Vampyr, an upcoming action-adventure by Life Is Strange developer DontNod, will be ready for release this summer. Announced via the most recent in a series of video diaries from DontNod, Vampyr will release for PlayStation 4, Xbox One, and PC on June 5.


The game focuses on Dr. Jonathan Reid and his affliction with vampirism. He encounters various citizens of 1918 London, Reid struggles with the juxtaposition between his duty to heal as a doctor and his need to feed as a vampire. Should players choose to indulge Reid's curse, they must decide which citizens will become his next victims and, depending on how intimately Reid gets to know those citizens, how Reid will live with the consequences of his curse.

In case you missed it, Episode 4 of DONTNOD Presents Vampyr is out, and reveals the release date!https://t.co/RZ5dn8Zm0k pic.twitter.com/QchUwpfYWm
— Vampyr Game (@VampyrGame) February 8, 2018