The Pokemon Company Reveals Plans For A Legendary 2018 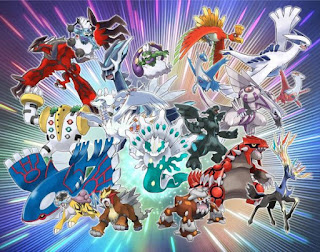 The Pokémon Company International today announced plans to celebrate a legendary year in 2018, highlighting some of the most sought-after Pokémon yet discovered. From February to November, Legendary Pokémon will be featured across the franchise, including monthly video game character distributions, new Pokémon Trading Card Game products, and mobile game and animation promotions.
Legendary Pokémon are extremely rare and powerful Pokémon, which exist across all regions of the Pokémon universe. Often elusive and incredibly hard to catch, Legendary Pokémon hold the answers to Pokémon lore and are deeply rooted to the regions from which they originate. Fans can learn more about these Pokémon at Pokemon.com/Legendary.
“As a thank-you to all the Trainers out there who have been so committed and passionate about Pokémon over the years, we want to make 2018 a legendary year,” said J.C. Smith, senior director of Consumer Marketing for The Pokémon Company International. “We’re offering fans a chance to access these powerful Legendary Pokémon across the brand while celebrating their role in the franchise’s legacy.”
Pokémon Video Game Distributions
Each month this year from February to November, players will be able to receive a different Legendary Pokémon as a free distribution through many of the Pokémon brand’s partners for owners of Pokémon™ Ultra Sun, Pokémon Ultra Moon, Pokémon Sun, and Pokémon Moon video games for the Nintendo 3DS™ family of systems. While fans can look forward to details about where and how to receive each of the distributions throughout the year, these Legendary Pokémon will be available to all players as part of the following schedule:

Pokémon Trading Card Game
Players of the Pokémon TCG can expect a range of Legendary-themed product tie-ins in 2018, including new collections, Pokémon-GX cards, and more. The Pokémon Company International will announce details about these new products throughout the year, closer to each item’s retail launch.
Pokémon Mobile Games
Players of the popular Pokémon Shuffle mobile game for Android and iOS devices will also be able to participate in the legendary year activities. In addition to the current expert and special stages featuring Legendary Pokémon continuing throughout the year, players will have two new event stages with Legendary Pokémon Dialga and Palkia, available to play from February 6–13.


Pokémon GO players can also expect to see special promotions featuring Legendary Pokémon in 2018 as part of this legendary year celebration, with details being released soon.

Pokémon Animation
The Pokémon TV app, available on iOS and Android devices, will feature monthly Pokémon movies tied to the Legendary Pokémon featured in that month’s distribution. For example, Pokémon the Movie: The Rise of Darkrai, which features Legendary Pokémon Dialga and Palkia, will be available on the app during February. Fans can also expect certain associated Pokémon movies to air on various Pokémon broadcast partners, including Disney XD in the US, at select times during some of these months.