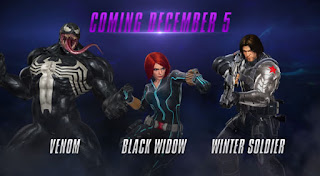 Capcom has released a new trailer for 3 upcoming characters in Marvel Vs. Capcom Infinite. We knew that Venom, Black Widow, and Winter Soldier were coming to the game, but this is the best look we've had of them in action. They're coming to the game as DLC on December 5, either as part of the game's season pass or as individual purchases for $7.99 each.