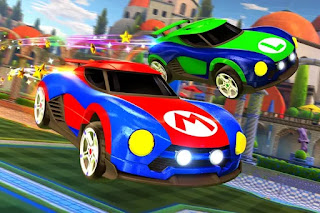 Rocket League for the Nintendo Switch finally has a release date. The game will be arriving on Nintendo’s latest platform on November 14th. Here’s the official blog entry for the exciting announcement:
What a play! We are proud to announce that Rocket League is coming to Nintendo Switch next month!
Switch owners will be able to download Rocket League through the Nintendo eShop starting on November 14th for $19.99 USD or regional equivalent. We’re supporting all of the system’s various play modes with this release, including wireless local multiplayer, and don’t forget about the Switch-exclusive Battle-Cars: ‘Mario NSR,’ ‘Luigi NSR’ and ‘Samus’ Gunship!’


Rocket League on Switch will have content, features and modes available in other versions of the game, along with support for cross-platform play with PC and Xbox One.
Posted by 9To5TechNews at 6:43 PM