Dormammu And Firebrand To Return In Marvel vs. Capcom Infinite 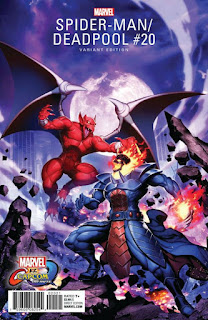 Dormammu (Doctor Strange) and Firebrand (Ghosts n Goblins) have been revealed as the  newest fighters to join Marvel vs. Capcom Infinite. The confirmation comes from the cover of the next Spider-Man vs. Deadpool issue variant cover, releasing on August 2nd. The cover shows Dormammu fighting Firebrand under a bright moon. Alongside the cover reveal, Marvel confirmed that gameplay of the 2 returning characters will be shown at Gamescom in Germany on August 22nd.
Posted by 9To5TechNews at 11:17 PM