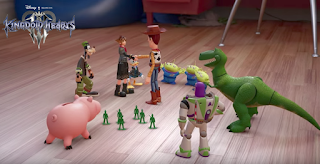 During the D23 Expo, Square Enix revealed the  first Pixar world in Kingdom Hearts III, which is Toy Story themed. In the trailer, we see Sora, Donald, and Goofy in Andy's room as toys. We also see the trio battle outside of Andy's house. Square Enix also announced that the game will be releasing next year in 2018. Check out the trailer below.