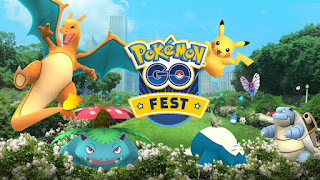 Niantic, Inc. and The Pokemon Company International have unveiled new details for Pokemon GO’s global events and real-world activities for Trainers around the world to participate in together. Pokemon GO Fest Chicago will feature a variety of activities for Trainers including unique ways for players at the event and across the globe to work together simultaneously to complete unique challenges and earn special in-game rewards. In addition to Pokemon GO Fest, Trainers in Europe will have a chance to team up this summer across seven cities during Pokemon GO Safari Zone events where they can catch rare Pokemon, obtain special rewards and take on powerful Raid Bosses.
Pokemon GO Fest will take place on Saturday, July 22 in Grant Park, located in the heart of downtown Chicago. Throughout the day, Trainers will be able to participate in three Challenge Window activities where they must work together to catch certain types of Pokemon in order to unlock a variety of perks for Pokemon GO players around the world. Trainers outside of Chicago will be able to participate in the festivities by catching as many Pokemon as possible during these Challenge Windows to extend the duration of bonuses unlocked by those attending Pokemon GO Fest. If Trainers around the world catch enough Pokemon, a mystery challenge will be revealed at Pokemon GO Fest Chicago for the potential to unlock an extra-special bonus across the globe.
In Europe, Pokemon GO Safari Zone events will be hosted at select Unibail-Rodamco shopping centers in Copenhagen and Prague on August 5, Stockholm and Amsterdam on August 12 and Oberhausen, Paris and Barcelona on September 16. Pokemon GO Safari Zone events will give Trainers the opportunity to catch a variety of Pokemon from special Kanto-region and Johto-region zones, including Pokemon never before encountered in Europe. Players will also have the chance to team up with one another and take on unique and powerful Raid Bosses. The Safari Zone events will also feature special Pokemon GO lounges where Trainers can recharge their devices and meet various Pokemon GO YouTube creators in attendance. 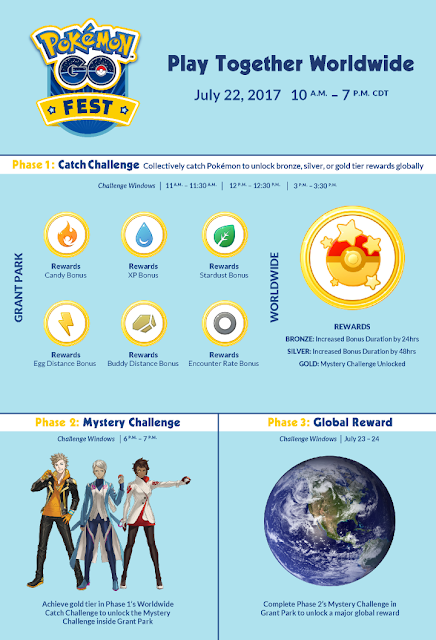 The Pokemon Company will also be hosting the annual Pikachu Outbreak event in Yokohama, Japan, from August 9–14, where a special Pokemon GO experience will take place. More details on the event will be revealed soon.To learn more about Pokemon GO Fest Chicago, visit: PokemonGoLive.com/Fest