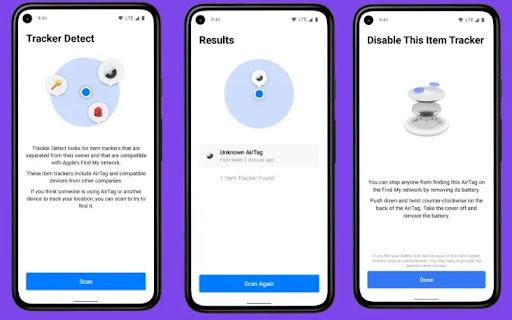 Apple has released Tracker Detect, an Android app that can enable people who don't have an iOS device figure out whether someone is tracking their whereabouts with an AirTag or other Find My-compatible gadget. When the software detects an
AirTag that has been removed from its owner, it marks it as a "Unknown AirTag." You can use the app to configure the tracker to play a sound if it follows you for 10 minutes, making it simpler to find. You can then tap the device with your NFC-enabled phone to receive instructions on how to remove the device's battery or disable it in other ways.

“AirTag provides industry-leading privacy and security features and today we are extending new capabilities to Android devices. Tracker Detect gives Android users the ability to scan for an AirTag or supported Find My enabled item trackers that might be traveling with them without their knowledge,” an Apple spokesperson told Engadget. “We are raising the bar on privacy for our users and the industry, and hope others will follow.”

Following various incidences of malicious actors utilizing AirTags to stalk people, Tracker Detect was released. For example, authorities in Canada recently issued a warning about thieves employing the $29 device to steal luxury cars. Apple upgraded its trackers in June to play a sound between eight and 24 hours after they're separated from their user, rather than three days as was the case at launch, in an effort to limit abuse.

The effectiveness of Tracker Detect in protecting people is dependent on the number of people who download it. Unlike iOS, which issues proactive warnings when improper AirTags are detected, you must install this app on your Android device. Its security features aren't yet included into Android.