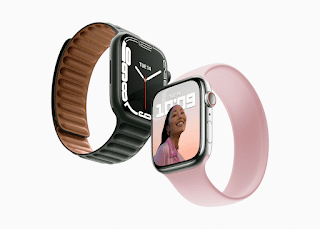 Apple says the design of Apple Watch Series 7 is refined with softer, more rounded corners, while the display has a unique refractive edge that makes full-screen watch faces and apps appear to seamlessly connect with the curvature of the case. The Apple Watch Series 7 also features a user interface optimized for the larger display, plus two unique watch faces — Contour and Modular Duo — designed specifically for the new device. With the improvements to the display, users benefit from the same all-day 18-hour battery life, now complemented by 33% faster charging.

The user interface is optimized to take advantage of the shape and size of the new display. Apple Watch Series 7 offers two additional larger font sizes, and a new QWERTY keyboard that can be tapped or swiped with QuickPath — allowing users to slide a finger to type — and utilizes on-device machine learning to anticipate the next word based on the context, making text entry easier and faster. With watchOS 8, larger menu titles and buttons in apps like Stopwatch, Activity, and Alarms also make the screen even simpler to interact with.