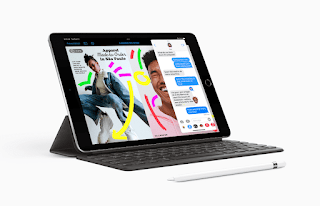 The new iPad comes equipped with the A13 Bionic chip, which purportedly delivers a 20% performance boost over the previous generation. This makes the new iPad up to 3x faster than the best-selling Chromebook, and up to a whopping 6x faster than the best-selling Android tablet, according to Greg Joswiak, Apple’s senior vice president of Worldwide Marketing. The Neural Engine in A13 Bionic also powers next-level machine learning capabilities, including Live Text coming in iPadOS 15, which uses on-device intelligence to recognize text in a photo that users can take action on.

For the first time, True Tone comes to the 10.2-inch Retina display on the iPad. A new, upgraded ambient light sensor enables True Tone, which adjusts screen content to the color temperature of a room. Joswiak says True Tone on the new iPad makes images appear more natural and provides users with a more comfortable viewing experience in all lighting environments.