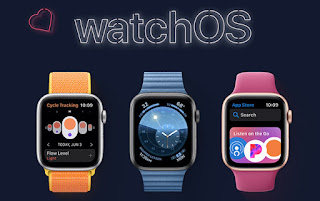 Apple has revealed watchOS 6. It helps Apple Watch users to better manage their health and fitness, and gives access to dynamic new watch faces and the App Store directly on Apple Watch.
A new Noise app is designed to help users understand the sound levels in environments such as concerts and sporting events and protect their hearing. As the sound levels change, the app’s decibel meter moves in real time. An Apple Watch can send a notification if the decibel level reaches 90 decibels, which can begin to impact hearing after four hours per week of exposure at this level, according to the World Health Organization.
The new Cycle Tracking app in watchOS 6 gives women the ability to log information related to their menstrual cycles and see predicted timing for their next period and fertile window using the convenience of Apple Watch.
The daily log function enables the quick addition of information related to the menstrual cycle, including current period, flow, symptoms, results from ovulation prediction kits and other elements of fertility tracking. The new Cycle Tracking feature is also available in the Health app on iPhone with iOS 13.
The new Trends tab in the Activity app of iOS 13 gives users a long-term view of their activity behavior to help them understand their progress. At a glance, the tab shows whether the trends are up or down for key metrics such as active calories, exercise minutes, walking pace and others. If the last 90 days of activity shows a downward trend relative to the last 365 days, the Activity app offers coaching to help the user get back on track.
For the first time, watchOS 6 brings the App Store directly to Apple Watch. Users can install third-party apps, search for apps using Siri, dictation or Scribble and view app product pages designed for the watch screen right from the wrist. And developers can build Apple Watch-only apps.
watchOS 6 introduces new watch faces and customization options offering more personalization and access to favorite apps, contacts and information. These include: Modular Compact, Solar Dial, California, Gradient and Numerals faces.
New developer tools include an audio API [application programming interface] to stream music, radio and podcasts, an API to give extended runtime to session-based tasks, such as physical therapy and meditation, and Core ML now uses the Apple Neural Engine on Apple Watch Series 4, enabling faster processing of on-device inputs.
The popular Voice Memos app will come to Apple Watch with watchOS 6. The operating system update also means that audiobooks purchased on Apple Books will be available to listen to directly from the new Audiobooks app on the watch.
A new Calculator app will help with tip calculations and splitting checks right from the wrist. Siri search queries will display webpage results in full on an Apple Watch. watchOS 6’s GymKit compatibility extends to manufacturers Octane Fitness, TRUE Fitness and Woodway, connecting Apple Watch to more cardio equipment in clubs around the world. 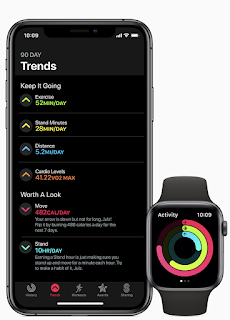 Joswiak says that all Apple Watch features are designed to protect user privacy. None of the audio or sounds in the environment are saved by the Noise app or sent to Apple — only the decibel level is sampled. The information from Apple Watch health features, including the new Cycle Tracking app, will be visible within the redesigned Health app on iOS 13. All data is encrypted on-device and if iCloud back up is selected by the user, data is encrypted in iCloud.
The developer preview of watchOS 6 is available to Apple Developer Program members at developer.apple.com starting today. New software features will be available this fall as a free software update for Apple Watch Series 1 or later paired with iPhone 6s or later running iOS 13 or later. For more information, visit apple.com/watchos-preview. Features are subject to change. Some features may not be available in all regions or all languages