iPad Getting Its Own OS, iPadOS, With Mouse Support And More 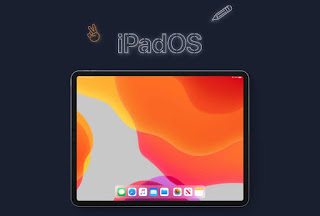 Apple has revealed iPadOS, an operating system to distinct the experience of the iPad. It builds on the same foundation as iOS, adding new capabilities and features specific to the large display and versatility of the tablet.
Introducing new ways to work with apps in multiple windows, more information at a glance on a redesigned Home screen and more natural ways to use Apple Pencil, iPadOS also benefits from the great new updates in iOS 13, making it the perfect device for consumers and creative pros alike, says Craig Federighi, Apple’s senior vice president of Software Engineering. However, he didn’t mention added mouse support, something most of us had anticipated.
The Home screen has been redesigned with a new layout to show more apps on each page. Today View can now be added to the Home screen, allowing quick access to widgets for at-a-glance information, including headlines, weather, calendar, events, tips, and more.
iPad users can now work with multiple files and documents from the same app simultaneously with updates to Split View, or can quickly view and switch between multiple apps in Slide Over. For example, customers can compose an email while viewing another email side by side or access multiple apps like Messages or Calendar with just a swipe. App Exposé provides a quick view of just the open windows for any one app with a simple tap.
With iPadOS, Federighi says the Apple Pencil is even more integrated into the iPad experience. Customers can now mark up and send entire webpages, documents or emails on iPad by swiping Apple Pencil from the corner of the screen. A redesigned tool palette gives access to tools, color palettes, shapes, object eraser, a new pixel eraser for removing any part of a stroke and a ruler for drawing straight lines.
Federighi says the Apple Pencil feels even more natural in iPadOS, using advanced prediction algorithms and optimizations to reduce its latency from 20 milliseconds to as low as 9 milliseconds.
The Files app also serves as a central place to access and manage documents. With  iPadOS, it will offer iCloud Drive support for folder sharing. Anyone with access to a shared folder will see it in iCloud Drive and will always have the ability to access the latest version.
iPadOS also supports external drives, allowing users to easily plug in USB drives, SD cards or log into an SMB file server, all from within the Files app. A new Column View with high-resolution previews helps users navigate directories, while support for Quick Actions such as mark up, rotate and create PDF make it easy to be more productive on iPad. iPadOS also introduces local storage, zip and unzip, and new keyboard shortcuts.
iPadOS automatically presents the desktop version of a website in iPadOS. It’s scaled for the iPad display, and optimizes it for touch, so web apps like Google Docs, Squarespace and Wordpress work better in Safari on iPad. Safari also supports new features such as a download manager, 30 new keyboard shortcuts and enhancements to tab management.
Text editing on iPad will also receive a major update with iPadOS, making it easier and faster to point with even more precision and speed, select text with just a swipe and use new gestures to cut, copy, paste and undo. Federighi, says additional iPadOS features include:
The developer preview of iPadOS is available to Apple Developer Program members at developer.apple.com starting today, and a public beta program will be available to iPadOS users later this month at beta.apple.com. iPadOS will be available this fall as a free software update for iPad Air 2 and later, all iPad Pro models, iPad 5th generation and later and iPad mini 4 and later. For more information, visit apple.com/ipados/ipados-preview. Features are subject to change. Some features may not be available in all regions or all languages.

Also found in first beta release of the new iPadOS has a hidden feature — mouse support. Developers using the first beta of iPadOS have found that you can control the software using a mouse plugged into your iPad. The feature was not announced by Apple, and it is a part of the accessibility options rather than a default. The same option, though, will also allow you to wirelessly connect an Apple Magic Trackpad.