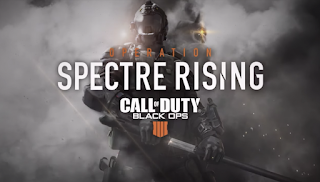 Treyarch and Activision the have announced  season (Operation Spectre Rising) for Black Ops 4. The centerpiece on launch will be the return of the Specialist, Spectre. This Specialist focus is on agility.
Also in this Operation we’ll see the return of Prop Hunt, along with a trio of new maps, a new light machine gun and a new melee weapon. In Blackout, map updates are the stars of the show, a Wetworks change on the original map has flooded a large region and encourages the use of boats. New characters and a dart also spice things up. The Alcatraz map has also been improved. Zombies players meanwhile, have a Super Blood Wolf Moon Gauntlet and new weapons.
The new season is available now on PS4. Xbox and PC players can expect to play Operation Spectre Rising on May 7.