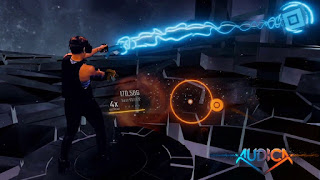 Rock Band and Dance Central developer, Harmonix, have announced a new VR rhythm-shooter called Audica. Audica is described as “a VR rhythm shooter that combines Harmonix's award-winning music gameplay with precision shooting mechanics and a killer soundtrack, all set in a mesmerizing cosmic arena.” Audica will be released through Early Access on Oculus Rift and Steam VR on March 7.
Audica will mainly focus on electronic music, and will include 10 songs upon its Early Access release, including “Destiny" by 1788-L & Blanke, “I Want U” by Alison Wonderland, “I Feel Love (Afrojack Remix)" by Donna Summer, “The Space” by James Egbert and “Splinter” by Savant. Harmonix hopes to have the game fully released by the end of 2019, and wants to expand to other VR platforms like PSVR and Oculus Quest if possible.