Sea Of Thieves' First DLC, The Hungering Deep, Is Out Now 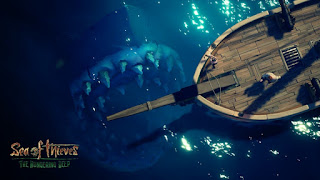 Sea of Thieves has received its first free DLC expansion, bringing a slew of new content to the pirate adventure. The Hungering Deep will be followed by 2 other expansions called Cursed Sails and Forsaken Shores in the future. The Hungering Deep features new items, a story campaign, flags, exclusive cosmetics, and more.  The time-limited story campaign centers around Merrick the bard, who is Sea of Thieves' first established character. Players will attempt to find Merrick in the world, and if successful, they can go against his nemesis to reap substantial rewards. New cosmetics include tattoos and scars that can be added to your customized pirate. New instruments are coming, drums and a speaking trumpet which allows you to be heard from a distance. New flags for your ship will give you some new ways off signaling your intentions to other ships during your voyage.