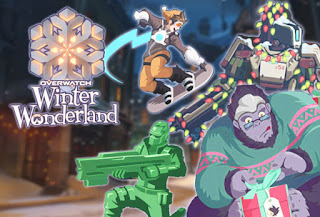 The holidays are upon us and with that, Overwatch’s winter seasonal event is returning. Overwatch head Jeff Kaplan explained the new additions coming to Overwatch for this event. At very least, Hanzo, Junkrat, and Roadhog are all getting new Legendary skins, with Kaplan noting that more will be announced at a later date. Additionally, Mei's Snowball Offensive is back from last year. The brawl-exclusive mode is exactly what it sounds like, pitting six Meis versus six other Meis in a snowball fight that alters the way she fires her weapons and regains ammo. Like last year, you can play in the Ecopoint: Antarctica map, but now you can play the mode on the Black Forest too. The winter transformations of all the maps are back, with the misty Black Forest getting its winter version with this event. Finally and most intersting, a new mode called Yeti Hunt will be introduced this year, which pits a team of 5 Meis against a single Winston, hunting him down. Winston gets a head start from the Mei team to get more powerful from different parts of the map. If Winston kills enough Meis, he wins, while the Meis have to kill Winston before he gets too strong. The event is going live on December 12 until January 2 for PlayStation 4, Xbox One and PC.


UPDATE (12/12/17): Overwatch’s Winter Wonderland is here for everyone to enjoy!