Here’s What To Expect From Pokémon GO’s January Events 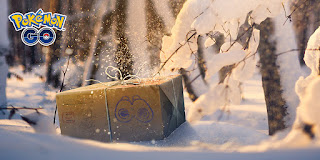 Niantic has announced the next events that are going to be happening in Pokemon GO. First up, you’ll be able to encounter Chansey in Research Breakthroughs all January long. There are also Collection Challenges, a “handy guide to catching Pokémon featured during certain events”, that are coming soon.

Thirdly, various Pokemon are going to be featured in 5-Star Raids and Mega Raids each week in January. Ho-Oh appears from January 1st to 5th. Genesect, holding a Burn Drive, appears January 5th to 12th. Heatran appears January 12th to 19th, followed by Kyogre and Groudon from January 19th to 26th. Ho-Oh, Heatran, and Kyogre and Groudon all have a chance to see their Shiny forms appear during their respective featured 5-Star Raids. The last featured 5-Star Raid of the month begins on January 26th, but all Niantic says is that the Pokemon is a “surprise”.

As for Mega Raids, Niantic says that “Mega Charizard Y, Mega Blastoise, and Mega Abomasnow will be appearing in Mega Raids, with Mega Charizard Y becoming even more powerful from Tuesday, January 5, 2021, at 10:00 a.m. through Tuesday, January 12, 2021 at 10:00am local time”. Then, on the 19th, “a certain Mega-Evolved Pokémon will make its Pokémon GO debut in Mega Raids! More details will come to light as we get closer to the date. Mega Venusaur and Mega Houndoom will also be appearing in Mega Raids beginning on January 19, with Mega Houndoom being even more powerful from Tuesday, January 26, 2021, through Monday, February 8, 2021”.

Fourthly, Niantic says that “Pokémon Spotlight Hour will take place every Tuesday at 6:00 p.m. local time”. 4 Pokemon are going to be “in the spotlight”, and you’ll earn twice of a certain item for catching Pokemon during this time. Here’s the list of Pokemon that’ll be in the spotlight, plus the item you can earn twice of:

Fifthly, “we’ll be celebrating during the Season of Celebration with events themed around different regions of the Pokémon world! Different weeks will highlight Unova, Sinnoh, Hoenn, and Johto, as Pokémon originally discovered in these regions will be appearing more often in the wild.” This begins with the Unova Celebration event on January 5th, and that is when more details are planned to be shared.

Lastly is the event that’ll be happening for New Year’s. Niantic confirmed that, from December 31st to January 4th, “you can expect new costumed Pokémon (like a silly Slowpoke wearing 2020 glasses) and new avatar items, as well as the return of some familiar Pokémon wearing party hats”.