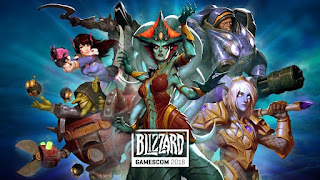 Looks like Blizzard has some big plans for Gamescom 2018, going as far to release a mobile app for the event. Here's the planned schedule for Wednesday, August 22 presentations on the main Gamescom stage:
All times are listed Central European Time.
LEGO has also teased a partnership with Blizzard. A tweet with six mystery figures load on screen with a backdrop of a few different Overwatch maps, including Hanamura and Watchpoint: Gibraltar. The six figures that come on screen aren't clear, but from left to right they appear to be Widowmaker, Reinhardt, Reaper, Genji, Soldier 76, Mercy and McCree. Hopefully more info will be revealed during Gamescom.