Overwatch's Moira Is Now Playable On The PTR 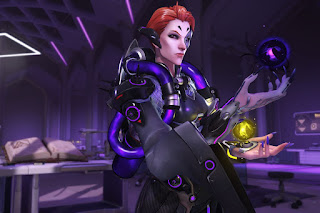 Moira, the dark medic support character of Overwatch is now playable on the Playable Test Realm. It isn't quite known when Moira will get released for all players, but she will have to go through quite a lot of hands-on testing before Blizzard feels comfortable releasing the character out of balancing. She’s feels really fun to play, but definitely need to practice with her. Check out the reveal trailer for Moira below.