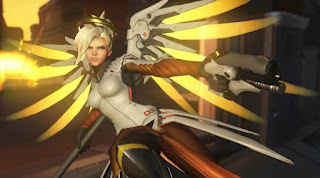 A new patch for Overwatch has released and with it comes changes for Lucio and Mercy. Lucio's speed after a wall run has been boosted by 65% . The biggest changes are for everyone's favorite medic. Here's the full list:

Developer Comments: Valkyrie no longer resets or reduces Resurrect’s cooldown. Instead, it now provides an extra 'charge,' allowing you to revive an ally even if it is still on cooldown. If the bonus charge hasn’t been spent when Valkyrie ends, it will be removed.

This method makes Resurrect more flexible when used with Valkyrie. For example, in the past if you wanted to resurrect two teammates, you had to revive the first target, then activate Valkyrie (causing the Resurrect’s cooldown to reset), and then revive the other target. With this change, you can now activate Valkyrie and fly in quickly to resurrect both targets instantly.

However, this still reduces the overall number of Resurrects that Mercy can provide, since Valkyrie no longer reduces its cooldown.
Posted by 9To5TechNews at 11:20 PM