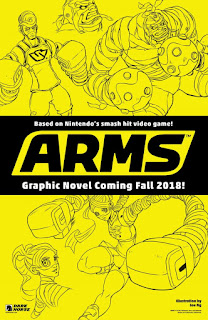 Dark Horse has confirmed that they are working on an ARMS comic series which is scheduled to make its debut in 2018. “The latest installment in Dark Horse and Nintendo’s partnership, ARMS is preceded by The Legend of Zelda™: Hyrule Historia, The Legend of Zelda™: Art & Artifacts, The Art of Fire Emblem Awakening, and The Art of Splatoon™.” “ARMS™ is a revolutionary fighting experience for all ages and skill levels. Utilizing Joy-Con™ motion controls, players can throw punches and guide them midflight to hit agile fighters, avoid incoming attacks with dashes, or trampoline high into the air to rain down fists from above. Players can select from a colorful cast of fighting champions and try to win the coveted championship belt in the ARMS Grand Prix. Dark Horse will publish the first of the ARMS graphic novels in Fall 2018.”

The first ARMS comic has debuted, but the rest of the series has been delayed to 2019. The comic was part of a double issue given away on Free Comic Book Day with a Legend of Korra comic. On the back cover, a small blurb says the full comic will be released in January 2019 and will tell the story of Spring-Man's efforts to overcome 600 opens standing in his way.
Posted by 9To5TechNews at 3:52 PM