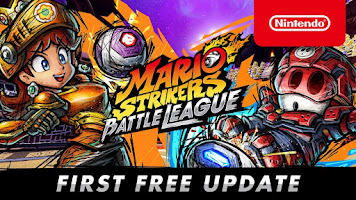 A loud roar erupts across the stadium. The audience cheers as newly added players dash out onto the field. These up-and-coming strikers have a lot to prove in this no-holds-barred sport, but they’re prepared to hit the rough turf with some slick moves and deliver the goods. Please welcome Daisy and Shy Guy to the Mario Strikers: Battle League game for the Nintendo Switch system.

Beginning July 22, a free update will be available to all Mario Strikers: Battle Leagueplayers which adds a number of new features to the game, including the new playable characters Daisy and Shy Guy, a new set of Knight-themed gear and the new Desert Ruin stadium.

More details on the new Mario Strikers content you can enjoy:

Have a crack at these added features and see what kind of brilliant plays you can deploy to drill the ball home. Your confidence and composure in front of the goal will surely inspire sports fanatics in the Mushroom Kingdom and beyond! Mario Strikers: Battle League will have two more free updates to look forward to in 2022. These updates will also include additional characters, gear and stadiums. Please stay tuned for more details in the future.

Have a look at the latest trailer to see what you can expect when the first free update releases on 7/21 at 6pm PT. pic.twitter.com/Mdi82gLPsU