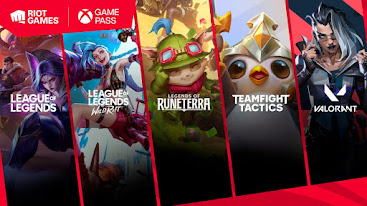 Marc Merrill, Riot Games' CEO, took a few moments during the Xbox showcase to announce a significant new partnership with Xbox and its Game Pass service. Riot's most popular experiences are making their way to Xbox Game Pass on mobile and PC, with rather extensive choices enabled for gamers to enjoy.

Game Pass users may expect to get the whole Foundations set of cards unlocked in Legends of Runeterra. For those who are unfamiliar, those are the fundamental cards for the game, providing the basic concepts. The card set will be available on both PC and mobile.

Select Little Legends will be unlocked in Teamfight Tactics, whether you play on PC or mobile. Furthermore, all agents in Valorant will be unlocked on PC. It's a remarkable collaboration that should benefit both Xbox and Riot. On the Riot side, the availability of so many characters and sets across their games means that a potentially large audience of Xbox gamers will be able to enjoy a wide range of what each of those games has to offer.

To Xbox's advantage, it adds significantly to the already tremendous allure of Xbox Titles Pass as a service and experience, since users may obtain access to a variety of components of each of those Riot games without incurring additional expenses.

While Riot's entry into Game Pass is significant, it's worth noting that it won't have much of an impact on Xbox console users, since all accessible choices are coming to particular combinations of PC and mobile, depending on games.

All of these choices are expected to be available to Game Pass users this winter.