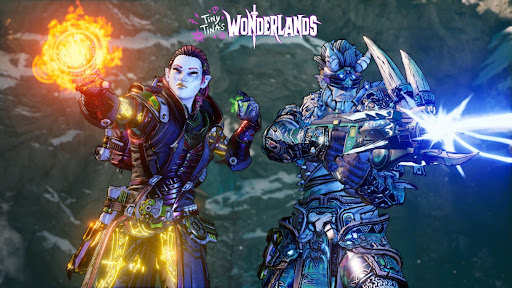 The Spellshot is the first new class to join the already-announced Stabbomancer and Brr-Zerker classes. “Gun-toting wizards who can unleash a constant barrage of spells and bullets and transform their enemies into harmless livestock with the snap of a finger,” according to the description. The Spellshot can also combine their weapon and grimoire to improve their spells and endow their weapons with new abilities.

The Clawbringer is the second new class. These are “faithful warriors who bring down thunder and flames upon their enemies with a spectral hammer alongside their fire-breathing Wyvern Companion.” They want to restore heroism to the Wonderlands, and their Dragon Aura gives their entire team increased damage and other benefits.

However, the new classes aren't the only item covered in today's release. The Weepwild Dankness, a forest-like location with countless mushrooms and trees, The Fearamid, a location where skeletons and the undead reside in every corridor, and Mount Craw, the home of goblins and towering trolls, are the three environments we'll be shooting through in Tiny Tina's Wonderlands.

Players can face these goblins, trolls, mushrooms, and more in Tiny Tina's Wonderlands alone or with up to three people. The more people in your group, the more difficult the opponents will be. In addition, players will have control over how item drops and enemy scaling are handled in multiplayer.

According to Gearbox, there are "millions of different guns to plunder in Wonderlands," with six categories of guns and six types of ammo. Fire, Frost, Lightning, Poison, and Dark Magic are the five different types of damage. Players can also use Wards, which imbue them with protecting magic, as well as rings and amulets that grant them various skills and qualities to aid them in battle.As you might expect from Gearbox's Borderlands franchise, all loot in the game will have varying levels of rarity. Tiny Tina's Wonderlands release on March 25, 2022.