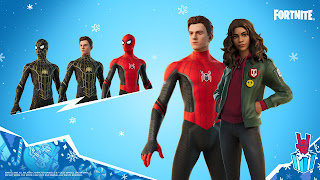 Fortnite 2021 Winterfest is officially live, and two Marvel Cinematic Universe characters have been added to the battle royale's extensive pool of character skins.

The MCU version of Spider-Man and MJ from Spider-Man: No Way Home are available in the Fortnite Item Shop. This Spider-Man will also have Tom Holland's "Integrated" No Way Home Suit as well as his Black and Gold Suit. It also contains an emote that allows him to remove his mask.

Also, players can now win up to 14 presents from Sgt. Winter, including three outfits, during the 2021 Winterfest, which runs through January 6, 2022.

“Crackshot’s handing Sgt. Winter the keys to the Winterfest Lodge, where Sgt. Winter will be giving presents to players,” a press release reads. “Unwrap a new present at the lodge every day for 14 days. Wrapped up in the lodge are two outfits, two pickaxes, two wraps, as well as a glider, contrail, emote, lobby track, loading screen, emoticon, spray, and banner.” 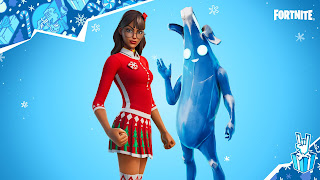 Two of the ensembles are shown below: Krisabelle, a festive version of Isabella inspired by the community, and Polar Peeley, a wintery version of everyone's favorite banana. After unwrapping the six presents that are blocking her, you can unwrap the Krisabelle attire, and after Polar Peely's giftbox thaws, you can unwrap him.

The Winterfest Lodge may be found by clicking on the snowflake tab in the Lobby. If you miss a day of presents, simply return to the lodge before January 6, 2022, when the Winterfest event concludes.