Tales Of Arise Gets A New Release Date, Also Coming To Next Gen 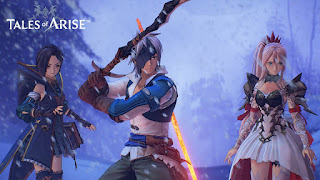 After being delayed indefinitely last year, Tales of Arise has a new release date. The new date has allowed the development to add next-gen console versions and more.

"Having announced that delay and working through COVID and changing how we do work, this year of development has been pretty positive for the most part," producer Yusuke Tomizawa told IGN. "Mostly because we have given ourselves the time to really focus on quality and improvement of the game, as well as expanding accessibility and giving players more options, such as porting it to the PS5 and the Xbox [Series] next-generation consoles so that we have wider options for the consumer to choose from when they're thinking about buying this game."

Tales of Arise will now be released on September 10 for PS5, PS4, Xbox One, Xbox Series X/S, and PC.

Email ThisBlogThis!Share to TwitterShare to FacebookShare to Pinterest
Labels: Bandai Namco, Tales Of, Tales Of Arise