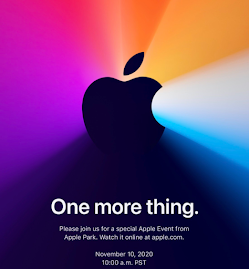 Apple is holding an event on Tuesday, November 10, at 10 AM PT. Dubbed “one more thing,” we’ll likely see the unveiling of the first “Apple Silicon” Macs.

Apple Silicon is, per Apple, “world-class custom silicon to deliver industry-leading performance and powerful new technologies” as the tech giant phases out Intel processors in its Mac line. It involves customized ARM technology, as well as Apple’s own System on a Chip. The most likely candidate as the first Apple Silicon Mac is in the return of the 12-inch MacBook or a 24-inch iMac.