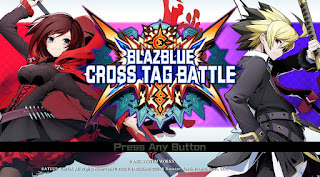 Arc System Works will reveal 5 new unannounced playable DLC characters coming to BlazBlue: Cross Tag Battle on September 22nd during the Arc Nama SP live stream which kicks off at 11am JST. The characters are part of the Version 2.0 Content Pack.
The Version 2.0 update will be available on November 21st and includes various character balance adjustments. There will be paid DLC on the very same day for $24.99 and it includes nine characters. Here are the characters who have have already been announced: